The role of anchor organisations in times of economic decline

The latest blog by Julia Slay, about Reniaisi’s work to develop an anchor collaborative in City & Hackney, covers the role anchors can play in recovery from Covid-19 and economic decline.

This is the first blog I’ve written since the Covid-19 pandemic began. Two months since the UK entered lockdown many of the anchor organisations within our network are now turning their attention to what the post-Covid recovery looks like, and what their role in that recovery is.

The blog explores what an anchor network could do in an economic downturn to support the local economy.

Anchors are typically – though not exclusively – not for profit organisations that are fixed in a location because their purpose is intrinsically bound up in that area.

Anchors are facing a new series of leadership challenges and need to find answers to questions that are difficult to answer. Questions such as:

How can community wealth building help places recover from Covid-19?

In this new context, the ideas and strategies of community wealth building can offer some helpful perspectives, and the value of local networks – like the City and Hackney Anchor Collaborative – is more important than ever.

These networks of local anchors are bound by a common population and geography. Together, their combined economic influence is a significant force in shaping the local economy. Anchor organisations are major employers in local economies, and a significant proportion of their employees often live locally too, eroding the distinction between ‘staff’ and ‘community’. Some of the major strategies in building community wealth are now rising to the surface as useful frameworks for thinking about recovery. In particular, the major levers that anchors have on their workforce, their expenditure and the depth of their engagement with local communities are now central tools in the social and economic recovery which is to come.

One of the central ideas in community wealth building is the role of anchor institutions in supporting the local economy to thrive. These local economies are place based – they could be a borough, town or county. They are also inherently human: the ‘local economy’ is the jobs that people can apply for in their local area; the organisations they run; the goods and services they provide. And while anchor institutions can support thriving local economies, through procurement, recruitment and community engagement for example, they also have a vital role to play during economic downturns, or other shocks and crises, to stabilise and support the people and organisations in their communities.

In fact, in times of economic decline the role of anchor organisations becomes even more important. Much of the original thinking behind community wealth building emerged from the important role that hospitals and universities played in the mid-western states of North America following the decline of the manufacturing industry, which had been a huge source of employment and prosperity for the region. Two thirds of America’s cities have a hospital or university as their biggest employer.  They are stable and enduring institutions and – crucially – they can do things at scale and for a place which other organisations can’t.

What can anchors do in an economic downturn to support the local economy?

From data sharing to procurement there are plenty of things that anchors, especially when working collaboratively, can do to help people and communities to recover from the expected economic downturn.

How can anchor networks support communities to recover post Covid?

Anchor organisations might not usually consider themselves leaders in local economic development, but their sheer size and economic presence means that they can play a crucial role in leading economic change, particularly in times of crisis.

This pandemic has revealed what the evidence has shown for many years: physical health outcomes are impacted by wider social, economic and environmental determinants of health. The opportunity that local anchor organisations have now is to combine their economic power to become a leader in helping to narrow those inequalities.

In the coming months, we’ll be delving deeper into these issues, learning from other locations and exploring what collaborative action the City and Hackney anchor network might take on these issues. We’ll share the learning from this work regularly. 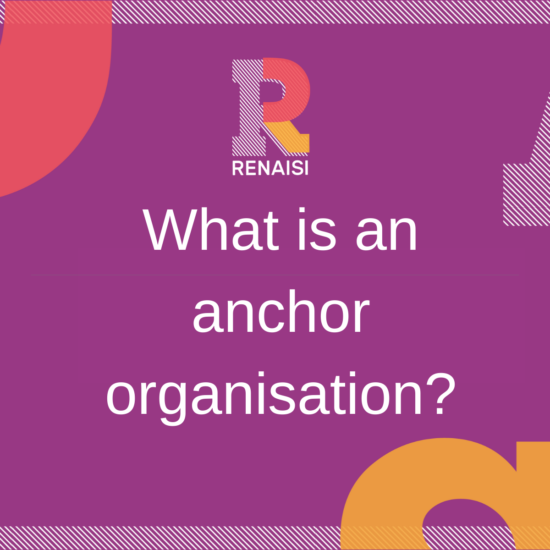 What is an ‘anchor’ organisation? 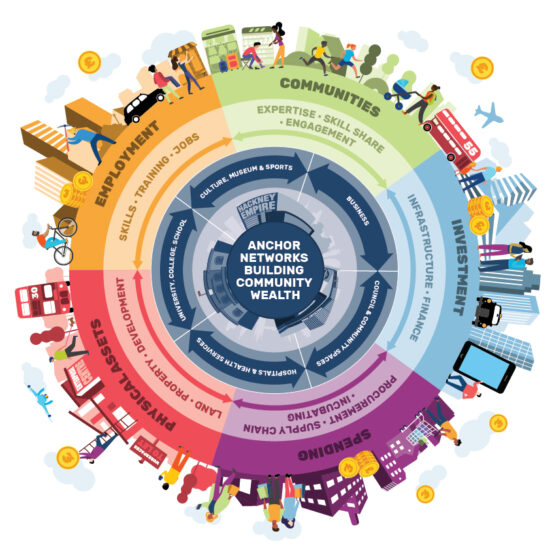